Blood Groups
Just as every human being is unique, so are the factors in your blood. People can belong to one of four blood groups; A, B, AB and O, which are formed by substances carried on the red blood cells.
There is another important difference in people’s blood called ‘rhesus factor’ or ‘Rh factor’ or D-type, which is a protein found on the red blood cells. Blood group and Dtype are inherited from both parents. People who are Rh – positive have what is known as the D antigen protein on the surface of their red cells. People who are Rh D – negative do not have the D antigen on their blood cells. In Europe around 85% of people are D – positive and 15% negative.

Why is the Rh D antigen important in pregnancy?
Unborn babies inherit their blood type from BOTH parents. This is important because pregnant women with D – negative blood can carry a baby which has inherited D – positive blood from the father. It is important to realise that not all babies who have D – positive fathers will have D – positive blood. Inside the womb the placenta usually acts as a barrier between the red blood cells of
the mother and baby. However, even in normal pregnancies, small amounts of the baby’s blood may cross over into the mother’s blood stream. The most common time for a baby’s blood cells to get into the mother’s blood is at the time of birth but it can happen at other times, for example, during a miscarriage or termination of pregnancy, or if something happens during the pregnancy such as having an amniocentesis, chronic villus sampling, vaginal bleeding or after abdominal injury such as following a fall, a blow to the abdomen or trauma from a seat belt.

If any of the blood cells from a D – positive baby get into the blood of a D – negative women, she recognises the D antigen in the baby’s blood as a foreign substance and may produce antibodies against it. This is called ‘sensitisation’, and anything that could cause the mother to produce antibodies against the D antigen is called a ‘potentially sensitising event’. As a rule, the first child that triggers this sensitisation does not suffer any adverse consequences as it will already have been born by the time antibodies have developed.

However, if the woman becomes pregnant again with a D – positive baby, antibodies may cross into the baby’s bloodstream and attack the baby’s red blood cells. This is called ‘haemolytic disease of the foetus and new-born’ or HDFN. 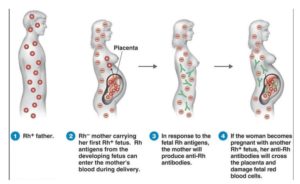 HDFN can be mild but if severe can lead to anaemia, heart failure, jaundice, brain damage or even death of the baby. With further pregnancies and further D – positive babies, the risk of earlier and more severe HDFN increases and the outcomes can be more serious. This is why a preventative measure such as the use of anti-D prophylaxis is so important.

What exactly is anti-D immunoglobulin?
Anti-D immunoglobulin is made from the clear part of the blood, called plasma, and is sourced from donors from countries outside of the UK. As with all blood products donors are screened very carefully and the plasma is treated so that the chance of passing on any infection is very low.

Routine ante-natal anti-D prophylaxis RAADP
Generally, all pregnant women who are D – negative and who have not already been sensitised (those who already have antibodies to the D-antigen), are advised to have prophylaxis with an anti-D immunoglobulin, regardless of whether they have already received anti-D for a sensitising event. This is known as routine antenatal anti-D prophylaxis or RAADP and is achieved by a single injection of 1500IU between 28 and 30 weeks of pregnancy.

Anti-D prophylaxis after childbirth
After birth, your baby’s blood group will be tested. If your baby is found to be D – positive, you will receive a further injection of anti-D immunoglobulin. This should be given within 72 hours of delivery for it to be effective. This is known as postnatal prophylaxis. If your baby’s blood group has not been tested, or if there is any doubt as to the result, you should receive anti-D immunoglobulin.

Does every D-negative pregnant woman need prophylaxis?
There are certain circumstances when this treatment may not be necessary:

Anti-D prophylaxis following miscarriage, termination of pregnancy or stillbirth
The loss of any pregnancy, for whatever reason, is traumatic for all those involved and there are many competing concerns following such a difficult time. However, it is still important to receive anti-D immunoglobulin, to reduce the risk of sensitisation and problems in following pregnancies. This is the case even where it is not possible to determine the baby’s blood group.

What should I do next?
If you are pregnant and have been informed that you are D – negative, the person responsible for delivering your antenatal care (Midwife, Obstetrician or GP) should discuss anti-D prophylaxis with you and explain the options available so that you can make an informed choice about treatment. Remember – if in doubt, do not be afraid to ask.

Further information may be accessed at: www.nhs.uk/conditions/Rhesusdisease/Pages/Introduction.aspx