This has been written as a guide for anyone having surgery to remove the lymph glands in their neck. It has been compiled by experienced staff and answers the questions most frequently asked by patients.

This information is only a guide and your healthcare team will give you more detailed information as you need and want it.

How do cancers spread? 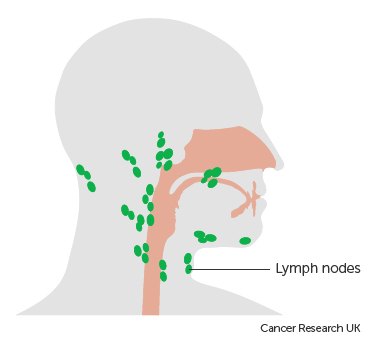 Most cancers which start in the head and neck region have the ability to spread to other parts of the body; these are called metastases or ‘secondaries’.

Cancers can spread in different ways. In the head and neck region lymphatic spread to the neck is fairly common. Sometimes cancers can spread throughout the lymphatic system to distant areas of the body. Lymph nodes or “glands” are like sieves, which catch any bacteria, viruses or cancer cells in the body. The nodes in the neck drain the skin of the head and neck and all the swallowing and breathing tubes.

Once one cancer cell has been ‘caught’ by a lymph node it can grow and multiply there and, in time, can spread to the next node down the chain and so on. Lymph node removal is carried out by an operation called a neck dissection.

What is a neck dissection?

There are different types of neck dissection, each used for different reasons. Your surgeon will discuss with you the details of the operation you are having.

A radical neck dissection is a surgical operation which aims to remove all the lymph nodes in the neck between the jaw and the collarbones. This is usually planned if there is evidence that several lymph nodes in the neck are affected and particularly if they are bulky. Because the nodes are small and stuck to other structures in the neck, they are usually removed with some surrounding tissues as well, to make sure all the diseased tissue is removed. The only structures which are removed are those which you can safely do without.

A selective neck dissection is performed in the majority of cases when the amount of disease in the neck is small or when there is a suspicion that there may be microscopic amounts of cancer cells in your neck. In this case, only the groups of lymph nodes that experience has shown to be most often affected in your type of cancer are removed. In both operations the tissues are sent to the laboratory to search for cancer cells and to see how extensive the spread has been.

What can I expect from the operation?

In many cases the neck dissection is only part of the whole operation you will be having; often there is a need to remove the primary tumour.

The operation is performed under general anaesthesia, which means that you will be asleep throughout. The surgeon will make one or two long cuts in the neck. The skin is then folded back to allow access to the underlying structures.

At the end of the operation you will have 1 or 2 drain tubes coming out through the skin, as well as stitches or skin clips to close the wounds.  You will be advised when these need to be removed (this is usually by the practice nurse at your GP surgery).

The scars usually run along the natural creases of your neck. When the skin is lifted up during the operation it loses its nerve supply and so may be numb after the operation. This means that most people do not have much pain afterwards, but if you do have pain, this can be well controlled with pain killers, which you will be offered.

If removal of one of the large muscles from the neck is necessary, the neck will look a little flatter on the side of the surgery.  You will probably feel quite drowsy for most of the day, following a general anaesthetic. If your neck dissection forms part of a more major operation, you may spend 1-2 days in the intensive care or high dependency unit (at Northampton General Hospital), before being transferred to the head and neck ward.

For Milton Keynes patients, if your surgery is on a Thursday or Friday, there may be the need to transfer you to Northampton General Hospital for ongoing care from the head and neck team (a leaflet will be provided to you by the ward explaining this).

What is the risk of complications and side effects?

When will I be admitted for surgery?

You will be asked to attend an appointment in the pre-assessment clinic before surgery. During this appointment we will assess your fitness to undergo a major operation.

You will be admitted via the Same Day Admissions Unit (SDAU) on the morning of your surgery, or the afternoon, before if the neck dissection is part of more major surgery (at Northampton General Hospital).

Admission time will also vary if you have other medical conditions that require earlier admission.  You are likely to stay in hospital between 3-7 days, depending on the extent of the operation. Your surgeon should be able to give you an estimate of the total length of stay.

Will I need any other sort of treatment?

This will depend very much on what treatment you have already had, where your tumour is and what type of tumour it is. Sometimes you may also need to have radiotherapy to improve your chance of a cure. This will be discussed at your first post-operative outpatient appointment.

If you have any questions or concerns, or need any further information, please contact us. You should already have been given contact details of your nurse specialist or key worker, so that is usually the best place to start.