Why do we need iron?
Iron is essential for making haemoglobin, a substance in red blood cells that transports oxygen around the body. Iron also plays an important role in other reactions in the body including the immune system. The body has some stores of iron but if your diet is low in iron rich food these stores will be used up and you can become deficient. Iron deficiency can lead to anaemia.
Symptoms of anaemia include fatigue, shortness of breath, dizziness and a pale complexion. You should try to include some iron-containing foods at each meal. There are several different types of anaemia and each one has a different cause, although iron deficiency anaemia is the most common type.

Most people should be able to get all the iron they need from a balanced diet but in some cases a supplement is needed. The most common of these is ferrous sulphate which is taken as a tablet. Some people can experience side effects when taking this supplement including; abdominal pain, diarrhoea or constipation, heartburn, feeling sick or black stools. These effects can settle down but if they do not you may be prescribed an alternative.

Good Sources of haem iron are: red meats such as beef, lamb and liver*, some fish and shellfish*. White meat such as chicken and turkey contain smaller quantities of haem iron.

Things to know about the absorption of iron

Absorption of iron is reduced by: fizzy drinks, large quantities of milk and dairy foods, tea and coffee and having too many high fibre cereals. Antacid medication for indigestion also reduces absorption.

Things to do to make sure you get enough iron 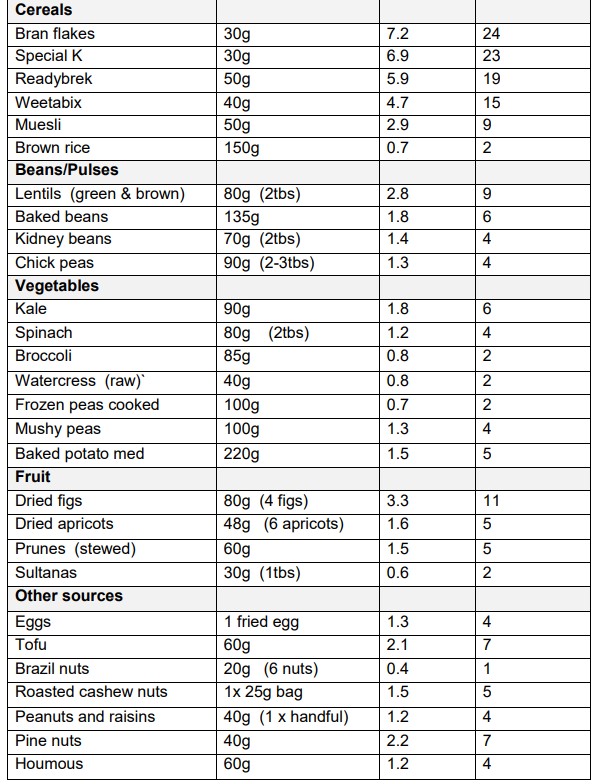