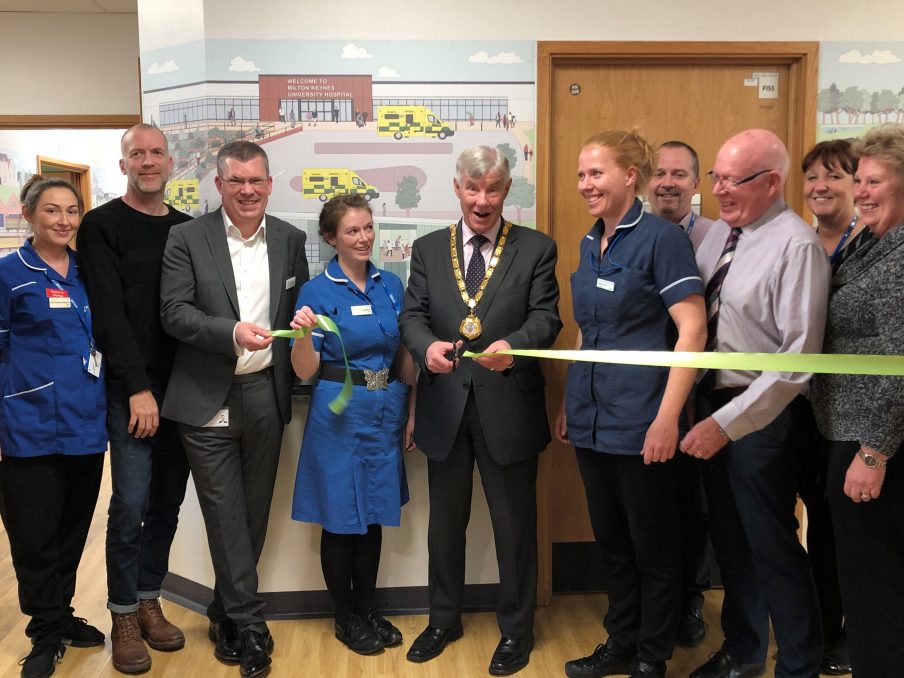 Milton Keynes University Hospital has welcomed the installation of a mural funded entirely through fundraising and donations.

Last year Naomi Avery, senior sister on Ward 23, ran 2,018km to enhance the experience of patients on her ward, raising an impressive £3,441 which was then matched pound for pound by Milton Keynes Hospital Charity. The money has funded a set of nine murals, featuring scenes and landmarks in and around Milton Keynes, culminating in the final picture of Buckingham Palace where Naomi was invited to a garden party to celebrate her fundraising success.

The artwork was designed by artist and illustrator Rob Cowan, who spent a considerable amount of time talking to patients about their local memories, and to Naomi about what she wanted to include in the murals.

Naomi said: “When the murals were installed, we immediately saw a change in the patients on the ward – they were so much calmer. Patients can walk around on their own, with family, staff or carers, and we’ve provided activity cards and colouring packs based on the murals for them too. It’s great to see that the hard work has paid off; the murals have already made such a difference. Thank you so much to all my family, friends and the hospital charity for their support. I couldn’t have achieved all this without them.”

Rob said: “It was fascinating to hear so many stories and memories from patients, including people who had actually worked at places like Bletchley Park and the Wolverton Works. The nine murals can be viewed on their own or patients can follow the journey round the ward, the idea being that each one is a talking point of familiar landmarks to help patients reminisce and to give them a stimulating focus during their stay on the ward.”

For more information on how fundraising for Milton Keynes Hospital Charity enhances patient care and experience, people can visit www.mkhcharity.org.uk